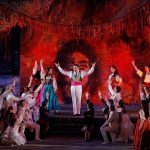 Let yourself be seduced by the magic of opera in the world’s largest and most famous outdoor theater.

Take the opportunity to discover our beautiful city and book your stay at the Hotel Villa Malaspina now!
CLICK HERE!

The 2021 Arena di Verona Opera Festival will present the productions originally scheduled for the 2020 Festival 2020, plus more exceptional events. For the summer of 2020 the Artistic Management has prepared an extraordinary revolutionary project: the Arena you have only dreamt of.

Numerous friends of the Arena di Verona have seen the project “in the heart of music” and are supporting it enthusiastically.

Arena Foundation is now ready to propose for August of this year a series of special events to be held in a completely new Arena setting. It has carried out in-depth work, in a responsible, carefully considered, fresh and innovative manner, which has resulted in a health protocol, currently being finalized, which combines artistic requirements with those regarding health and social distancing.

Arena Foundation is defining a wonderfully rich program of special events, embellished by a series of international stars and excellent Italian performers which, thanks to the new format, will ensure spectators an unmissable experience that it the result of a new play on perspective able to highlight the venue’s unique architectural and historical aspects. A monument and a theatre as they have never been seen before.

The dates and the artists will only be announced definitively once the necessary authorizations have been obtained (also in compliance with the ministerial decrees regarding the emergency), to avoid creating confusion for our spectators at this stage.